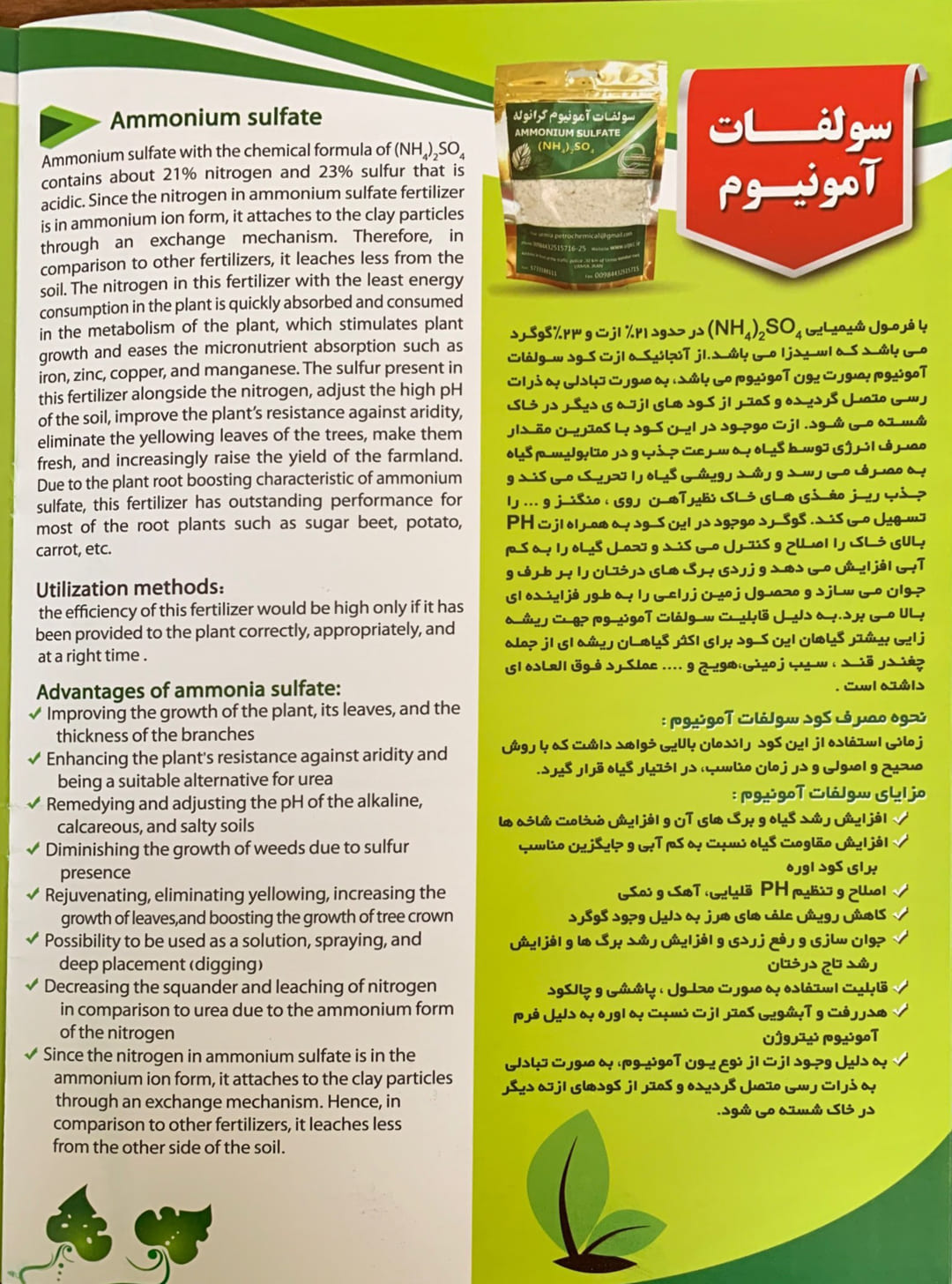 Ammonium sulfate is one of the most widely used and highly effective nitrogen fertilizers for agricultural products, which contains 21% of nitrogen in the form of ammonium ions and 24% of water-soluble sulfur in the form of sulfate. Nitrogen in ammonium sulfate fertilizer is wasted and has much less leaching than other nitrogen fertilizers and is also an excellent source of sulfur, which has several basic functions in plants, especially protein production. Nitrogen of ammonium sulfate fertilizer is in the form of ammonium ion, binds to clay particles and leaches less into the soil than other nitrogen fertilizers. This type of nitrogen is absorbed quickly by the plant with the least energy consumption and is consumed in plant metabolism. Nitrogen is one of the most important factors in increasing the desired performance and the most consumed element by plants, which is absorbed as nitrate, ammonium and urea ions through the roots and after transfer to the leaves participate in the synthesis of amino acids and finally proteins. Creates.

This fertilizer, if used as a road, immediately provides sulfur to plants and shrubs. Rapeseed is the most needed sulfur among commercial oilseeds. Ammonium sulfate provides the sulfur needed by the rapeseed plant in the form of sulfate, and the dissolved sulfur of this fertilizer is quickly available to the roots.

Ammonium sulfate fertilizer has the best composition to form amino acids and therefore proteins in pistachios, almonds and walnuts to fill the kernel of these agricultural products.

This fertilizer is used in two types of granules and powder. The granule form is suitable for chalk fertilizer. Although this material is soluble in water, but for use in the irrigation system, it is better to use crystal, powder or liquid to speed up the dissolution. Increase plant access to the elements and also prevent sedimentation in irrigation systems.

Typically, in fields, 400 to 500 kg per hectare is planted before planting, and in gardens, one kilogram per tree is used in early spring, and in greenhouses, 15 grams per plant, and in gardens, per square meter. 25 grams of ammonium sulfate fertilizer is used.